FEDERAL MINISTRY OF SCIENCE AND TECHNOLOGY

The International Astronomical Union (IAU) is an organization of professional astronomers, founded in 1919, whose mission is to promote and safeguard the science of astronomy in all its aspects through international cooperation. Now, at the onset of the twenty-first century, the Union regards access to knowledge about the Universe as a birthright of people in all countries and considers the dissemination of astronomical knowledge throughout the world as one of its most important tasks. Because astronomy combines science and technology with inspiration and excitement, it can play a unique role in facilitating education and capacity building and in furthering sustainable development throughout the world.

The IAU seeks partners in implementing the astronomy for development programmes described in the IAU Strategic Plan 2010 – 2020, “Astronomy for the Developing World.” This Plan is an ambitious blueprint for using astronomy to further global capacity building throughout the decade.

The present state of astronomical development, the degree of primary and secondary and tertiary education and the gross domestic product (GDP) of each country are all factors that IAU took into account in planning and optimizing future strategy.

For the purposes of discussing world astronomical development, the report divided countries into five groups as follows: 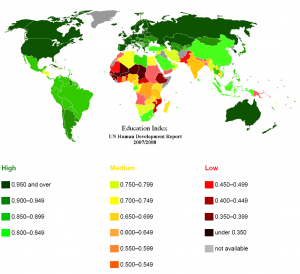 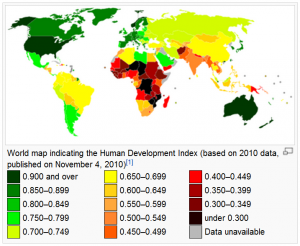 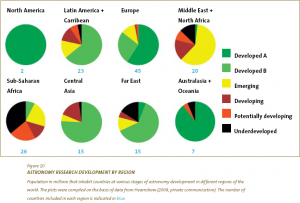 This calls for concern and action. If countries in West Africa aspire for economic and technological development, then the need to invest in astronomy development could not be over-emphasized. IAU on its contribution to develop astronomy in such countries established the Office of Astronomy for Development (OAD), which is situated in Cape Town South Africa. To coordinate astronomy development activities in the developing or underdeveloped countries is not a small task, hence the establishment of Regional Office of Astronomy for Development (ROAD) and Language Expertise Centres across the world.

1. The creation of a small IAU Office of Astronomy for Development (OAD) to provide global coordination and strategic guidance. The OAD has recently been established as a partnership between the IAU and the South African National Research Foundation (NRF), based at the South African Astronomical Observatory (SAAO).

2. The creation of associated regional nodes (ROADs) at various locations throughout the world.

The OAD, together with the ROADs, will coordinate and stimulate IAU capacity building activities in primary, secondary and university education, research capacity and public outreach to realise the vision of “Astronomy for a better world!”

IAU Regional Nodes. An IAU Regional Office of Astronomy for Development (ROAD) will be a centre, normally consisting of at least one full time employee, hosted by an organisation or institution with strong links to astronomy research and/or education and good Internet connectivity. Among the tasks of the regional node will be:

i. Fostering the goals of the IAU Strategic Plan in the region concerned.

ii. Regional management, coordination and evaluation of IAU capacity building programs, including recruiting and mobilizing volunteers. Examples are schools for researchers or schoolteachers and visits and lectures by experts. Liaison with the global OAD and the sector task forces in planning and implementing relevant programs within the region.

iv. Coordination of contacts between the IAU and national authorities in the region

v. Maintenance of a regional IAU website and appropriate forums for development and education.

vii. Provision of advice, guidance and information for astronomers in all countries in the region about IAU programs.

ix. Reporting regularly to the OAD, and IAU Executive Committee where required, on activities of the regional node.

NASRDA, through its Centre for Basic Space Science, Nsukka, applied to host the Regional Node for West Africa. The application was granted a provisional approval, last year. The provisional approval is expected to be made permanent by November this year.The application to host the Regional Node by NASRDA-CBSS has the support of other West African countries.

Expectations by the IAU

The Regional Node is expected to provide the following for the Regional Office of Astronomy for Development:

i. Suitable office space with the necessary facilities including telephone, internet, computers, printers and other office facilities

ii. Communications and Information Technology (IT) support where necessary

A ROAD Oversight Committee, comprising representatives of CBSS and other partner institutions in the region, as well as the OAD Director, shall exercise general oversight of the activities of the ROAD and Regional Coordinator. The Committee shall be chaired by the Director of CBSS.

Implications for hosting the Regional Node

When granted full approval, IAU expects the Regional Node or Associated sponsoring bodies to raise funds to carry out activities of the Regional Node. Support should cover normal overheads, suitable infrastructure and sufficient support for travels and computers etc. The Regional Node is expected to carry out fund raising campaigns for successful implementation of its programmes.

Activities expected the Regional Node to carry out yearly include among others:

iv) Encouraging the development of Astronomy/Space Science in other West African countries.

v) Endeavour to establish a partnership with upcoming SKA for the benefit of Africans and the world at large.